What started as a tradition consisting of sitting around the television with his family watching Roberto Luongo backstop the Vancouver Canucks, has led to a path between the pipes.

Despite growing up in Winnipeg Manitoba, Giannuzzi found himself rooting for the Vancouver Canucks when he first started following hockey as the Winnipeg Jets were yet to be reintroduced into the NHL. Giannuzzi started playing hockey at the age of four and shortly after beginning to play, he developed an interest in goaltending. Being brought up in an Italian household, he was immediately drawn to Roberto Luongo who, like him, is Italian.

“I just loved to watch him every night,” Giannuzzi said. “I loved his style, I thought all the equipment was so cool. So I asked my parents ‘hey can we can set up a way for me to play goalie’.
“I bought my first set a gear and pretty much went from there ever since. I've loved it.”

From the moment Giannuzzi put on the pads and traded in his stick for a paddle he knew that goaltending was something that he wanted to pursue. “I was a huge NHL fan right from the start. I just thought this is like the coolest thing ever like these guys do this as their job and pretty much ever since I started playing that was like my goal and I want to get to this level. I want to play in the NHL and yeah, that's pretty much right from the start. I wanted to be a professional.” 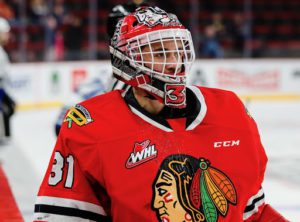 By the time he started playing prep school hockey, Giannuzzi along with the rest of the western Canadian 02’s were gearing up for the 2017 WHL Bantam Selection Draft. With the possibility of being drafted on the horizon, Dante realized that playing pro hockey doesn’t have to just be a dream. “Once I was selected in the draft and (I thought) okay, I can do this, you know, I got a good shot at this now. I got to worry about trying to make the team and kind of go from there” Giannuzzi recalled.

Getting drafted was just the first step. Once his name was called, Giannuzzi’s focus shifted to actually making it to the next level. While the work was only beginning for Giannuzzi, learning that his first-choice team had selected him 99th overall was a real turning point in his career. “I had a few teams on my list and Portland was number one actually on my list” the Winterhawks goaltender said.

It has been 3 seasons since The Winterhawks drafted Dante Giannuzzi and the late 2002 born goaltender has played just a handful of games however, in his limited time in the WHL, he has given management something to be excited about.

At the start of the 2019-2020 season, Giannuzzi was sent to play Junior A in the Manitoba Junior Hockey League. “I talked to my Coach and he's like, ‘yeah you know, we got Joel (Hofer) this year who is obviously a very talented goalie and there's not very much playing time for you here this year’. So they actually sent me down because they wanted me to play more” Giannuzzi explained.” 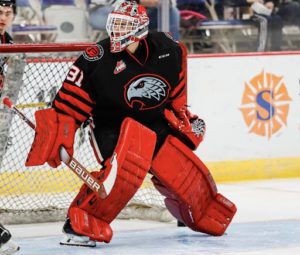 When Joel Hofer made Team Canada at the 2020 World Junior Championship, the Winterhawks called up their former 5th-round pick from the MJHL. While Hofer stole the show for Team Canada, Giannuzzi made sure that the absence of his fellow goaltender would go unnoticed. In his WHL stint, the rookie netminder went on a breathtaking 6-0 run and finished his year with a 7-1-0 record. During that span, Giannuzzi posted one shutout and finished the year with a .931 SV% and a 1.68 GAA. His GAA statistics were the highest amongst all goaltenders with 8 or more games played while his save percentage sat in second place behind only Dustin Wolf.

With Joel Hofer moving on from the WHL to play in the AHL, the starting job in Portland has opened up and Giannuzzi has his sights set on taking over. “I've been in the backup position for a couple years now. So I'm really looking forward to having a bigger role in the team this year” the 6’1, 180 lbs netminder said. “I'm definitely trying to build off of my play last year. I found that I had a really good end of the year last year. But again, I didn't have a ton of playing time, so I just want to build off of that.”

The condensed 24-game 2020-2021 season may not see Giannuzzi get to start as many games as a starter would typically see however, he will arguably have even more responsibility. In a condensed season, every game means much more than it would in a normal year. “There's not gonna be a whole lot of room for error this year,” Giannuzzi said. “We're all going to have to really bear down and just really bring it every night.” 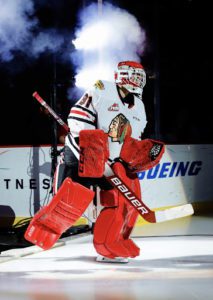 To prepare to take on the starting job this year, Giannuzzi has been putting in the work. With gyms and rinks closed in his hometown of Winnipeg due to Covid-19, he made some calls taking matters into his own hands. “I've been really super lucky actually. As soon as Winnipeg actually, all of Manitoba shut down. I called my billets and I said ‘hey, would you guys be able to you know take me for a little while a little bit early’ and they said absolutely. So me and a few other Manitoba boys came out and we are actually able to skate and work out most days here. We usually have one or two days off a week.”

Getting back on the ice and being able to hit the gym has brought a sense of familiarity and regularity during a year that has been anything but normal. "Usually in the morning we get into the gym and we're able to actually do weight training as usual as well as we're able to get on the ice. So we're definitely really lucky in that aspect” Giannuzzi said.

With the Portland Winterhawks starting job highlighted as a goal for the upcoming season, Giannuzzi hopes that his success on the ice will catch the eyes of NHL scouts ahead of his second year of NHL draft eligibility. “I'm definitely really looking forward to my second year at eligibility here and you know having a big season before the draft.”

The work that Giannuzzi has put in this offseason has paid off ahead of the WHL’s return to play. Giannuzzi will be getting the starting nod between the pipes for the Winterhawks in their season debut on March 18th against the Tri-City Americans.

For Dante Giannuzzi, winning the starting goaltender job with the Portland Winterhawks is only the first step to one day being able to fill in the skates of his childhood idol Roberto Luongo, and become a professional goaltender in the NHL.