William Portokalis Making the Most of an Unexpected Opportunity Overseas

When you spend your entire life growing up in one city, moving somewhere else can be quite a culture shock, especially in a foreign country with a different first language from your own. William Portokalis hadn’t even considered leaving his hometown of Mississauga to play hockey since getting drafted by his hometown OHL team, but Covid-19 altered his plans.

Growing up in Mississauga, William Portokalis was a Steelheads supporter long before he heard the team call his name at the OHL Draft. For years, Portokalis had attended countless School Day games at the Paramount Fine Foods Center with his classmates as part of the club's School Day events where local students from around the community would get the chance to watch the local OHL team play. To this day, Portokalis still attends the School Day games however, he now finds himself putting on the show instead of taking it all in from the stands.

Playing for the Mississauga Steelheads has been a dream come true for the 19-year old forward who had spent the past two seasons playing for the team after getting drafted in the second round of the 2018 OHL Priority Selection Draft.

Ever since the 2019-2020 OHL season had been cancelled just after the Steelheads had clinched a playoff spot, Portokalis has been itching to get back onto the ice. On August 5th, the OHL announced that they would be delaying the start of the 2020-2021 season to December 1st. In October, the league was forced to push the season back again due to the Ontario government's health regulations. The pushbacks continued and it became a continuous cycle which Portokalis started to realize had no end in sight. 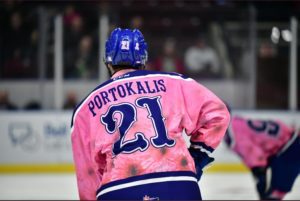 In what was supposed to be an important year for the Steelheads forward, finding a way to play was crucial and it opened a door to an opportunity that he had yet to even consider. “I think after that third time it [the OHL season] got pushed back in early November, I think that's when we kind of sat down and said ‘okay, we’ve got to send you somewhere to play’ because it’s one thing to train and it another thing to play and I think playing is the best thing for me right now,” said Portokalis.

The need to play games and move overseas was solidified after the results of the 2020 NHL Entry Draft. “I think the big thing for me was not being picked this year in the draft,” Portokalis said. “When they kept postponing the OHL and it kept going back and back, I think it was just time that I needed to get out of the house and start playing games.”

Not hearing his name called at the draft was obviously not the result in which the Steelheads forward was hoping for; however, he used it as motivation. “I think not getting picked kind of added fuel to the fire and it just made me want to get drafted even more this year,” Portokalis said. “I think it was probably one of the best things that could have happened, as weird as it sounds, not getting drafted. But I think it was a really good thing for me because it was a big eye-opener [realizing] that `okay if this is what I want to do, I’ve got to train ten times harder than everyone else because I'm behind right now and I gotta get right with them and ahead of them.’”

After making the decision to move overseas to play hockey until the OHL started its season, the Portokalis family didn’t want to waste any time finding a team. His advisor Pat Curcio quickly came back to his client with the opportunity to play professional hockey in Slovakia, an opportunity that William did not hesitate to accept. “Slovakia was the first one [option] that was brought up to me and my family and we just went with it right away, '' Portokalis explained. “We didn't want to waste any time trying to choose and wait for other options. As soon as Slovakia came we were like ‘okay, we’re going to play,’ especially because it was a pro league and I know it's kind of tough to get into a pro league in Europe. So as soon as it came up, it was really fortunate that it happened and we jumped on it right away. I think we made our decision within a week and I was on the flight a couple of days later.” 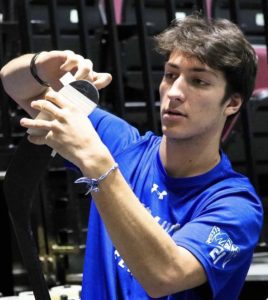 The difference between European hockey as opposed to the North American game stretches well beyond the rulebook, and for a player getting his first crack at playing professional hockey in a new country, it took some getting used to. “Honestly it's two different types of hockey,” Portokalis said in regards to his first impressions of playing in Slovakia. “I think over here it’s a lot faster than it is in the OHL. We are playing with a lot of older guys as well. Like I know our captain is 40 years old so it’s a big age gap” he added. “I think the OHL has more skill, so it’s an adjustment in the sense that you’ve got to be a little harder on your stick and harder in the corners because they are a lot bigger.”

Moving overseas may not have been the easiest decision for the young center to make; however, it was certainly the right choice. Portokalis has had an impressive season in his professional hockey debut. Despite moving to a new country and having to learn a new language and adjust to a whole new style of hockey, the Mississauga Steelheads forward has impressed on the ice. His 14 points in 22 games rank as the fifth-highest scorer on his team despite playing at least 19 fewer games than any of the players above him. He finished tied for fourth place in points by a player under the age of 20. His eight goals were the highest marker by a U20 player and the third most on his team.

It wasn’t just his play on the ice which benefited from playing with Slovakia’s HK 32 Liptovsky Mikulas. Being on his own for the first time in his life, moving overseas was about more than just improving his game on the ice. His individual growth as a person was perhaps the most important outcome of Portokalis joining HK 32. His personal growth was quickly noticed by those around him upon his return to Mississauga. According to his father, Nick Portokalis, his son's “mental toughness” has been his biggest personal growth both at home and at the rink. “Being in Slovakia taught him to think for himself, make smart decisions and take full ownership for his development” Nick said. “He learned to analyze and correct his mistakes and build upon his successes. He understands the value of persistence and grit, and uses professional feedback to improve his game, and adapt to a variety of situations” he added.

Being on his own for the first time in his life meant that everything was in William’s own hands. From his dryland training to his personal nutrition, everything was up to him. William got to know what it’s like to play professional hockey as he chases his dream of making it to the NHL. “He had to learn to be self-sufficient because, in essence, he was pretty much on his own, and fully responsible for his development and performance,” Nick said.

There is no denying that everyone has been through a lot in the past year and a half. Everyone has lost out on a lot and in the hockey community, the OHL was hit hard. While the opportunity to play was being taken away, William Portokalis saw the chance to get a taste of what it takes to live the life of a professional athlete. The confidence in his abilities on the ice surely improved but what was even more important was what he learned off of the ice. In Slovakia, Portokalis gained a sense of independence and felt the pressure and responsibility that comes with it. Playing Major Junior hockey, you learn how to become a more independent and responsible person but overseas, it wasn’t about learning anymore, it was about living.

Playing in Slovakia this year was not a thought that the Mississauga Steelheads forward may have had before the pandemic, nevertheless, with everything that Portokalis has learned this year, he is now more prepared than ever to make it to the next level in North America.