On January 22nd and 23rd , Texas Rangers Golf Club will be host to the first inaugural “Texas Showdown”

This showdown is an opportunity for elite level talent across Texas to compete against each other. These 8-11 year olds are brining some impressive hardware and accolades to the table. 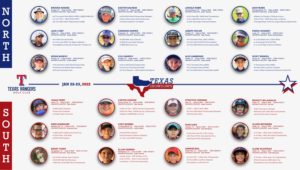 Sure to be an amazing display of talent and skills, the Texas Showdown is introducing a 36 hole elite competition with four different nine hole match play events. Best ball, alternate shot and singles matches will allow for these youth golfers to display not only their on course skills, but strategy implementation within a match play event.

Prospects by Sports Illustrated is committed to bringing this variety of elite level matchups to future youth golf events across the country.

With most youth golfers across the country playing in traditional stroke play events, this North vs. South competition between an entire state’s top talent is sure to garner a lot of attention. 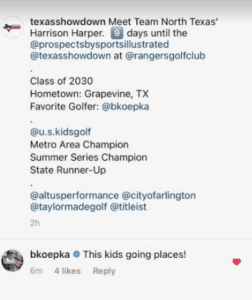 Among support from brands such as Prospects by Sports Illustrated and Taylor Made,  Altus Performance offered free training sessions leading up to the match.

Working directly with members from the North Team leading up to the competition, Atlus Performance's own Nick Dunn has been impressed with this group of golfers' competitive instincts. As the Director of Residential Programming and High Performance Coach for Altus, Nick has been tabbed as "Best Teacher in Texas" by Golf Digest.  Nick reiterates, “I’ve really enjoyed coaching a number of the players on the North team. They are fearless competitors. The shared passion we have for the game and to improve is so apparent. I could not be more excited to support and play a role in developing them during their journey in golf. I’m very blessed for their trust in me.”

When asking players, captains and coaches about what to expect from this Texas Showdown, we received some insight just how focused and determined these 8-11 year olds are.

Bryar Murphy (North Team) “With top level competition, I’ll be focused on staying level with my emotions and transitioning to the next hole with a fresh mindset during matches.”

Ben Murphy (North Team Captain) “With so many good players in one event, it will be interesting to see how the captains solidify their pairings and what adjustments happen heading into Sunday’s singles event. Texas Ranger’s golf club is a great course and there will be birdies to be made. The team that gets hot with the putter will ultimately take it, in my opinion.”

Jon Rubis (North Coach) “I'm excited to see some of our pairings play together as a team. It will be interesting to see if our visions of how we think they will compliment each other play out.

Pierce Doudney (North Team) “I am excited to play against the top players in the state. If our north team can make some putts then we will win.”

Lincoln Rubis (North Team) “I’m really looking forward to playing with friends instead of against them. I’ll focus on my own game and the course. I think we are going to win in a close match.”

Cole Murphy (North Team) "I enjoy playing with other talented players and we have built friendships with many of the top players in the state."

Zach Rubis (North Team) “I’m looking forward to playing on a high level team and playing with friends. I’ll be focus on my game and I believe that the North team will win if we play solid golf.”

Reed Rodriguez (South) “This is special because it is a different format than the ones we are used to. We all watch the Ryder Cup, and the team aspect and competitive nature are things I love and can’t wait to be a part of. There will be strategic aspects that come into play during the weekend, but I am going to focus on my own game and one shot at a time while trusting my captain’s lead.”

Jim Terry (South Team Captain) "All of the matches have the potential to be exciting.  This is a group of some of the best golfers in Texas.  The level of play from these young players is far beyond what many believe is capable of such young golfers.  I'm excited to see how it all plays out!"

Dan McLaughlin (South Coach) “Watching Ryder Cups over the years, I always hear how Europeans have so much more experience because they grew up playing a lot of match play. That’s why I love getting our boys opportunities to play match play like the Texas Showdown at a young age. Match play brings out a unique part of golf where you are less concerned about overall score and you are focused on competing against the guy across from you. Strategy, team aspect, and mindset are so different than a normal tournament.”

Texas Terry (South) "At the 2021 U.S. Kids World Championships in Boys 8, after each day of the three-day competition, the Top 3 in the World were from the State of Texas! What is so special about the Texas Showdown is that all of the golfers are from Texas, and we get to play as a team. I will be focused on having fun with my friends, doing my steps, and cheering my teammates to victory. My prediction is that South Texas is going to win the 2022 Texas Showdown!"

Francisco Rodriguez (South Coach) “The younger kids on both teams have very strong resumés. It’ll be interesting to see how they match up against the older, longer players in the event. This mix of players is what makes the event special.”

Cody Borden (South) “I’m looking forward to starting 2022 golf season by competing in a Ryder Cup format. We see the pros do it and now we get to do it as well. Here in Houston we compete against each other all the time and now we get to team up and take the battle to North Texas. Bragging rights are on the line. We are coming to win, but it’s really the chance to do it as a team and that’s what’s really going to be fun”

Carter Hoskins (South) “I’m really excited to play in an event that’s like the Ryder Cup, I love watching it”

If you are in the area and want to witness the best golfers from across Texas, check out the Texas Showdown’s itinerary below: 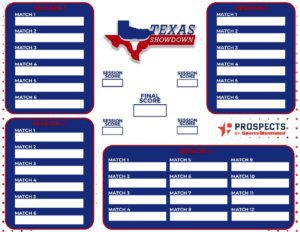